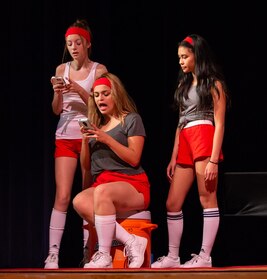 Gia Yoder is a senior at Harrisonburg High School. She performed in her first theatrical production in the seventh grade, and fell in love with the stage. Her passion for storytelling through theatre, however, began her freshman year in Harrisonburg High School’s one act That Was Then, for which she won an All-Star Cast award from the Southeastern Theatre Conference (2017). Since then, she has worked on productions of Good Kids, Peter Pan, Legally Blonde, Newsies, The Comedy of Errors, and Seussical, each of which has allowed her to dive into a different style of performing. Outside of acting, she also has a love for music and vocal performance. She takes voice lessons each week with Sarah Hamilton, who she’d like to thank for her constant support. She has also been a member of the Shenandoah Valley Children’s Choir since the age of 7, which has given her a strong musical education from a young age. She is also a member of the HHS Fine Arts Academy, in the drama and choral strands. After graduation, she plans to continue to pursue her passion for performing at a 4 year college.